The aim of this report is to provide a comprehensive introduction to the colossal freshwater issues we are faced with today, with a particular focus on Asia. This report is primarily targeted for the wider business and finance community and as a reminder for those who are involved in the water industry or for those who have followed the water situation in the past. Only by raising fact-based awareness of the issues, could we reach rational, sustainable solutions. This report is packed with facts, data and expert views with full bibliography - the only report needed to get a helicopter view of the state of water in Asia today. Upon order, you will receive a soft copy as well as a hard copy by mail. 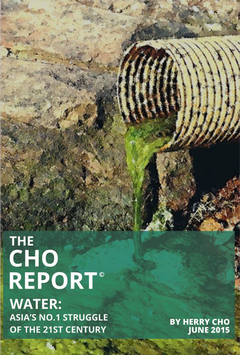 Freshwater shortage or a real risk of a shortage is increasingly apparent in too many regions of Asia today in some of the most populated areas. This is mainly due to over-extraction, spatial and temporal mismatch between supply and demand, excessive pollution, climate change or geopolitical decisions in the usage of shared water on some transboundary waterways. The underlying drivers include population growth, increasing middle class, urbanisation and industrialisation. As such, the awareness of water as a finite resource is steadily increasing.

Without freshwater, there is no food, no energy, and no life. Asia, with its significant contribution to the world population, high rate of urbanisation and industrialisation, uses the lion's share of the world's water resources. East, South, South East and Central Asia account for approximately 57% of 3,918km3 of freshwater per year that gets withdrawn globally. Furthermore, freshwater withdrawal as percentage of the Internal Renewable Water Resources is the highest in the world in the Middle East, South Asia (including India) and Central Asia, at 55%, 46% and 56% respectively. Most of this is used for agriculture in Asia, whereas in Europe and North America higher usage from the industrial sector is observed. As the developing nations mature, an increase in industrial and municipal water usage is a common pattern. The future looks stark if water management continues as status quo, where the demand is increasing from the competing end users whilst the supply is gradually being depleted or polluted.

Regarding water security in Asia, the following should be taken into consideration:

·    Secure freshwater for sustainable agriculture and food, or import water-intensive produces from water abundant parts of the world;

·   Secure freshwater to support energy and sustainable industry growth, or import water/energy-intensive products from water abundant parts of the world; and

·    The choices made to secure the above should maintain regional and national stability.

In order for the above to be implemented with urgency, and the situation is urgent in many parts of Asia, freshwater needs to be viewed as a scarce resource, water productivity and conservation should be widely promoted and adopted with appropriate incentives, the concept of circular economy and efficient wastewater management needs to be integrated with appropriate incentives, and pollution needs to be strongly discouraged, which is already implemented in some countries by way of charges or penalties.

Marginal cost of water availability indicates conservation and improving water productivity may be easy wins with potential net savings in some cases rather than a cost, and short payback periods. Preventing leakages also appear to be a key enabler in having more efficient water supply. Currently, supply increase measures such as inter-basin transfers and desalination appear to be more costly options. However, there is significant R&D expenditure being spent to bring down the cost of desalination and its high energy usage. Such innovations that may drastically impact the marginal cost of water availability should receive on-going support.

Given the frequent funding gap in water supply and wastewater treatment operations, tariff review may be required when tariff is far below the cost of production (operations and maintenance, let alone the capital expenditures), and when water bills are far below what an average household may be able to afford, along with provision of targeted subsidies. The increase in financing for water will depend on whether the urgency for further investment today is effectively communicated, and whether the projects can be structured to be economically viable. Continuously developing innovative funding methods, such as the green bond which debuted in 2008, will be important especially when multi-use facilities become the norm with the onset of circular economies.

“Anything else you are interested in is not going to happen if you can’t breathe the air and drink the water. Don’t sit this one out. Do something. You are by accident of fate alive at an absolutely critical moment in the history of our planet.” – Carl Sagan (astronomer, cosmologist, astrophysicist, astrobiologist, author, 1934 – 1996)